Over the past several weeks, an upheaval of the government in Ukraine has been underway. The people of the capital city of Kiev were gathered in the streets protesting the regime of President Viktor Yanukovych. After a deadly confrontation that left hundreds of citizens and police dead, the Ukrainian people finally seized the capital building by force and set up their own interim government.

President Yanukovych had been a key role player in the rejection of a trade agreement with the European Union that would critics say would ultimately develop Ukraine into a more modern nation and “westernize” the countries economy.

The opposition to Yanukovych claims that the deal was only rejected in order to align the nation with Russia’s own interests. Immediately after the European Union deal was rejected, a similar deal was cemented with Russia, however protesters don’t feel that Russia has the best interest of Ukraine in mind. The European Union deal had already been active for some time and the Ukrainian president virtually U-turned out of the deal without warning in favor of Russia’s trade agreement.

The people of Ukraine are simply tired of Russian authority and wish to seek their own fully independent nation. According to many of the protestors in the streets Yanukovych was no more than a Russian puppet that didn’t have the interest of the Ukrainian people in mind.

On February 21, 2014, it seemed a peaceful resolution to the conflict was nearing. Opposition leaders and Ukrainian government official agreed on a deal to keep the protests peaceful and to hold early elections. The deal fell through however and within days hundreds of protesters had been killed by snipers in Ukraine’s independence square.

Video surfaced of civilians dragging away wounded friends and family off the streets, as the government and opposition leaders both argued over who instigated the violence.

Even through the bitter European cold, protestors continued to battle with police outside of the presidential palace until eventually they stormed the building and ousted Viktor Yanukovych to Russia.

Not all Ukrainians are happy to be free of Russia’s rule however. Simple demographic charts show that eastern Ukraine has a majority of Russian nationals. These people are still loyal to Russia in certain regions of the country like Crimea.

Since the interim leadership took hold the people of Crimea are beginning to fight back. People in the west generally support a European Union friendship and an independent country while those in the east still believe in traditional Russian values and prefer Russian leadership.

The split is so prevalent from east to west that armed gunmen have begun raiding government buildings in Crimea and have established their own pro-Russian regime. Armed unmarked troops now patrol Crimea’s airport.

Meanwhile in Russia, troops have begun to mobilize in what is being called “surprise military drills.” The world is holding its breath, waiting to see if a Russian military intervention is imminent. Russian president Vladimir Putin maintains that there is no plan for military action in Ukraine, but some believe that the unmarked military men guarding the Crimean airport are in fact Russian soldiers themselves.

The unmarked soldiers are being cited as “an armed invasion and occupation,” and “a direct military provocation on sovereign Ukrainian territory.” By Ukrainian interior minister Arsen Avakov.

When asked of their intentions one of the unmarked soldiers, who refused to give his name or nationality commented, “We are checking to make sure that no radicals come to Crimea from Kiev, from the Ukraine,”

Other armed men dressed in black around the airport identify themselves as the pro-Russia Unity Party, and stated they were appointed by the New Crimean Administration that was formed Thursday after armed men stormed the capital building of the region.

President Viktor Yanukovych maintains that he is still the leader of Ukraine and that he was not ousted by protesters but rather was forced to flee the palace in fear of his own life. In Ukraine he is a wanted man, however, in Russia he is being held a free man and even appeared at a press conference where he remarked that the new Ukrainian interim government is illegitimate and doesn’t reflect the actual needs of the people.

“I want to apologize in front of everybody — to the veterans, to the Ukrainian people — that I did not have the strength to stop what is now taking place in the country from taking place,” the president said. He also made multiple comments of how the people of Ukraine must unite to hold itself together as one nation despite the social split that runs right down the middle of the country.

The United States officially stands with the Ukrainian people and has made that very clear. The U.S. has repeatedly backed the people in revolting countries around the world.

Ukraine’s involvement with Russia goes all the way back to the 18th century; in fact, the capital city of Ukraine, Kiev, is referred to as the mother of Russian Cities and the cradle of the Rus civilization. Though these two nations are deeply entrenched in each other’s cultures it seems a political divide will be enough to break the two up once and for all.

As for the future nothing is certain. President Viktor Yanukovych still maintains that he is the leader of Ukraine. “I intend to continue the fight for the future of Ukraine against those who, with fear and with terror, are attempting to replace the power. Nobody has overthrown me,” he said.

“I was compelled to leave Ukraine due to a direct threat to my life and my nearest and dearest.” Whether this claim has any weight to it will be decided in the coming weeks.

Would You Foster an Animal? 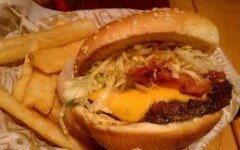 It’s that time of the year, and the summer movie season is kicking off with a bang. "Avengers: Age of Ultron" opens with $187.7 million in the North...

On Thursday, April 23, 2015, I went to go see the play “James and the Giant Peach” produced by the Aberdeen High School’s drama team. It was rea...