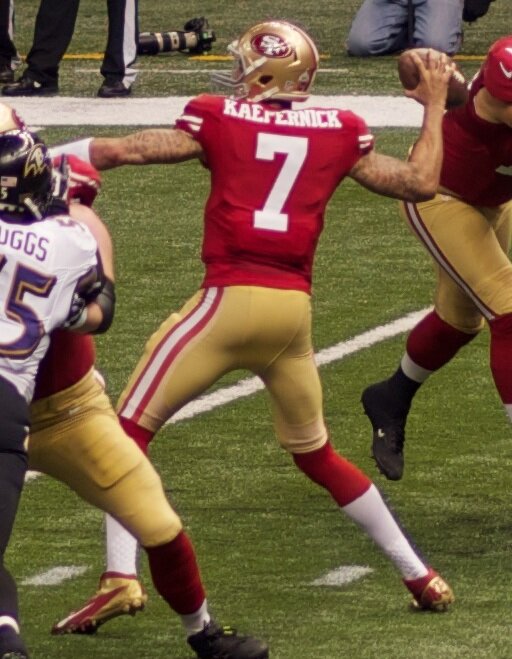 Colin Kaepernick made a bold statement by staying seated when the National Anthem played at a preseason football game. Many people had things to say about this. Some were outraged and some understood where he was coming from.

He has the right of the First Amendment, so it’s not like he was doing anything wrong. He didn’t stand up because he is not proud of our country right now due to the fact that so many black Americans have been killed.

By standing up for the National Anthem, you are giving respect to your country. But, if your country is disrespectful to people of color, the question on many people’s minds is this: do they deserve our respect?

Some people who weren’t so sympathetic to his reason for not standing spoke their mind. According to ESPN, Jim Harbaugh, his former head coach, said, “I acknowledge his right to do that. I don’t respect the motivation or the action.”

He later added on Twitter, “I apologize for misspeaking my true sentiments. To clarify, I support Colin’s motivation. It’s his method of action that I take exception to.”

Some people agreed with what he did, on the other hand, and showed respect for him, Ndamukong Suh, Miami Dolphins defensive tackle, told the Palm Beach Post. “You’ve got to respect the man’s opinion, as well as his actions.

I definitely understand where he’s coming from in choosing to do what he did. I think it’s an individual choice. At the same time, I think it’s a duty of ours as leaders, especially with young kids, to make a good, proper announcement if we feel the need to, and I think that’s what he’s doing. I support him in that,” Suh said.

Jerry Rice, former 49ers wide receiver and Pro Football Hall of Famer, on Twitter, said that “All lives matter. So much going on in this world today. Can we all just get along! Colin, I respect your stance but don’t disrespect the flag.”

In our opinion, Colin didn’t disrespect the flag, he didn’t throw stuff at it, or set it on fire, he just simply isn’t proud of the country that he’s in. The only people who we should be angry with is the police officers that obliviously continue to kill black people as soon as they feel like it.

One Response to “Somebody Who Won’t Stand for Injustice”