Last week, the Ravens offense was embarrassed in a 23-20 loss to the Buffalo Bills. This week, the team will try to bounce back against a 3-1 Miami team that is extremely talented.

The Ravens fed the ball to Ray Rice five times last Sunday, totaling only 17 yards, while the Bills run stopping defense was 30th in the league last week. Aside from an almost nonexistent run game, Joe Flacco failed to consistently deliver his 50 total pass attempts. Flacco ended the day 25-50, 347 yds, two TD’s, and five interceptions. That was the most interceptions Flacco has thrown in a single game, but with multiple injuries at the wide receiver position and an offensive line that has failed to run block at all, it seems the Ravens have a sink-or-swim mentality heading into Miami this week.

It’s a proven fact in the NFL that you need to combine the run and pass to win; it’s just football 101. The Ravens have, in the past, been effective in the run game, especially with Pro-Bowl running back Ray Rice in the backfield, but last week, the team’s identity was gone and the offense seemed largely out of rhythm.

The Ravens went out and traded with Jacksonville for LT Eugene Monroe this week to try to get those issues sorted out. According to the front office, they believe that the change up front will improve the offensive line’s play and allow Baltimore to run the ball. Eugene Monroe is regarded as one of the better tackles in the league, and his addition will no doubt benefit the Ravens this week and put the offensive line in a position to be competitive.

Miami is a strong team that is playing at home one week after seeing their perfect record tarnished on Monday Night Football against a tough Saints team in New Orleans. They’re looking for redemption.

Expect Mike Wallace and Ryan Tannehill to hook up a few times before the game’s end.  The Ravens’ defense will be tested by Lamar Miller after being overpowered by C.J. Spiller and Fred Jackson last week. Miller has just 196 yards and two TD’s on the season, but historically the Ravens don’t play in Miami well. Most of you might remember the Ravens being the “1” in Miami’s 1-15 season. In fact, the Ravens usually look their worst on the road, which is something they’ll have to look to avoid this week in Miami.

With the Browns leading the AFC north going into this week, the Ravens can ill afford to slip up this Sunday. It’s a statement game for the Ravens this week, to see how this squad can bounce back on the road. The keys to the game are pretty simple:

Will the Ravens pull out this road win? Fans will have to watch to find out. 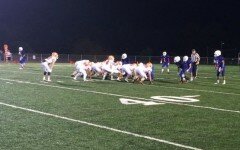 Last week, the JV football game was moved to Monday, September 28 because of outside issues. When they finally got to play, the Eagles had a rough gam...