Hasn’t it always been traditional for boys to ask girls to dances? However, when is it appropriate for a girl to ask a boy? Well, the time is now, ladies!

According to a Prom/Formal Dance page on About.com, the Sadie Hawkins Dance is named after the comic strip character Sadie Hawkins, who appears in the strip L’il Abner, written by Al Capp from 1934-1977.

In the comic strip, the single women of the town got to chase bachelors and marry the ones they were able to catch. This happened on a certain day that was designated “Sadie Hawkins Day.”

This idea spurred a concept in the U.S. and Canada to create a dance, in which it was expected that females would ask males to the event. Historically, males have asked females to formal dances, so this idea was a fun break in age-old tradition.

The Sadie Hawkins Dance at AHS will be held in the auditorium and snacks will be provided in the cafeteria at a small cost. Bring some extra cash for surprise activities!

Dress code is “business casual”—however, Mrs. Gentry says there will be some activities that require physical movement, so you may want to dress appropriately for that if you want to participate.

If you plan on attending, tickets will be $5 and will be sold at a time and date to be determined. Ask senior Scott Wilson or Mrs. Gentry about ticket sales. 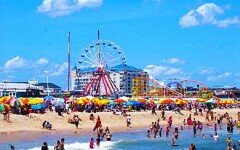